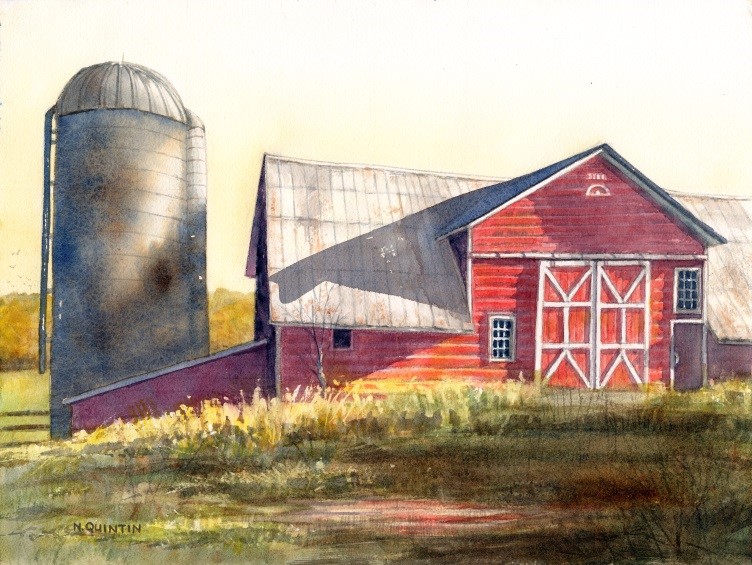 Nan is an award winning artist who grew up in Groton, Massachusetts. She received a B.A. in Fine Art with a minor in Art History at Framingham State University. She received a Certificate in Pre-press and Computer Graphics at Clark University.

Having grown up on a small farm in New England, many of Nan’s paintings reflect this area’s rural landscape. She has lived in Pepperell, Massachusetts for over 30 years, just three miles from her childhood home, where she often goes to paint “en plein air”.

Nan is a board member of the Chelmsford Art Society. She has studied watercolor painting with Tony Couch, Nancy Russo, and Carlton Plummer; and oil painting with Christopher Volpe.

In addition, Nan designed and painted the “Historic Pepperell” mural in the Lawrence Library in Pepperell, MA; and has served as an art judge for several local exhibits.

“Many of my paintings reflect the relationships between people and the things that surround them. In order to capture these relationships and perceptions, I paint buildings, vehicles and other items, as well as activities, typically without depicting the people themselves.

I am fascinated with the Japanese concept of wabi­-sabi, briefly described as “transient, incomplete, imperfect beauty”. I find belongings left behind – items once loved and now abandoned, and falling away in varying degrees of gracefulness as they return to earth – to be poetic and expressive.

Vacant houses arouse my curiosity. Pondering the secrets of an old house, such as the events leading up to the abandonment, the identities and personalities of the occupants, the dreams, the builder, and the history of the property, is like solving a mystery. An abandoned house is not empty; its life-force remains. Typically, while I paint, I make up stories about my subject, imagining the answers.

Although many of my paintings are scenes of nature that capture the beauty of New England, the area in which I have always lived, many of my paintings contain man-made items as well. Not only are we humans part of nature, but we can and do live harmoniously with our environment and are part of its presence.

In addition to the influences of the natural world, I am captivated by dichotomies such as interior and exterior, light and dark, reality and dreams, and past and present.

Windows and doors frequently appear as symbolic devices, they pique the imagination of the viewer as they let some people or things in while keeping others out.

I often try to portray the idea that what is not seen may be more important than what is seen. The viewer’s imagination is needed to complete the picture.”